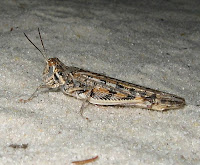 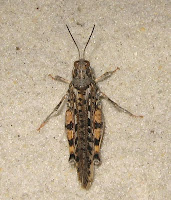 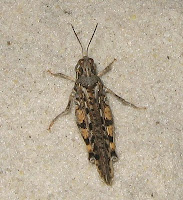 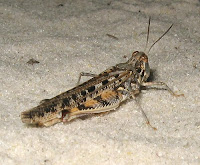 I have no idea as to how common these grasshoppers are in the Esperance region, but the one above had almost certainly been blown off-course as this species is commonly an inland species inhabiting red sandy soils, thus enabling it to use its dark mottled colors to blend into the environment, whereas here on the south coast white sands, it stands out like a beacon. Although according to A Guide to Australian Grasshoppers and Locusts by DCF Rentz et.al, there are coastal varieties of a greyish color.

These grasshoppers do not occur in plague proportions like locusts and represent no substantial threat to agriculture. The above Sand Grasshopper was noted at the end of January and probably caught a ride on the frequent northerly winds at this time of year.

My thanks to Dr David Rentz for identification.

Two photos added of the white sand form of Urnisa guttulosa. The more obvious mottling of this coastal form on its lighter background, provided an effective match with the white sand containing dark specks and various small pieces of dead vegetation. 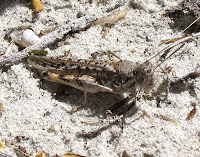 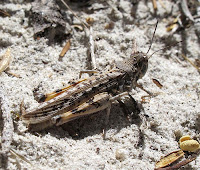 Posted by William Archer at 5:54 PM