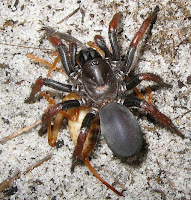 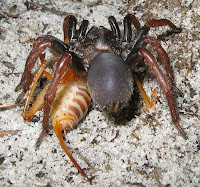 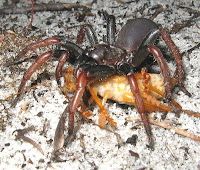 When I met this lady it was during September after a fine rain shower on a calm mild night that left everything fresh and moist, plus it was topped off by a multitude of singing crickets. Sighting a mature female burrowing spider away from her burrow was most unusual, but this one had and was sufficiently far away that I could not find it. She was obviously out hunting after winter and probably drawn by the cricket activity.


The aftermath of the fine rain shower was also important, as primitive spiders breathe from book-lungs, where the book pages are replaced with air absorbing tissues, which are only effective when humidity is high. So when conditions are hot and dry and humidity low, these burrowing spiders do not venture out, but remain in their holes where humidity levels are higher. Modern spiders also have book-lungs, but have a more adaptable tracheal (tubular) breathing system too, thus enabling them to tolerate much drier conditions.

This red legged female Aname species is the only one I have seen, with all others having black or very dark brown legs. Without microscopical inspection there is no way of telling if it is an undescribed species, or just a color form of a better known one. So until this red legged individual is described or allocated, I shall continue to call it Aname Species 2.

From previous experience of this group of spiders, they can be very aggressive, rearing up with little provocation, and although not regarded as life threatening, they can inflict a nasty bite and leave you feeling very sick, so best to keep your distance.

The head and body length of this animal was between 3-4 cm (around 11/2") and with the legs (that are much shorter than those of the male), she would span around 8 cm (over 3"). The habitat was deep white sand supporting heath dominated by Banksia speciosa.

Posted by William Archer at 5:20 PM