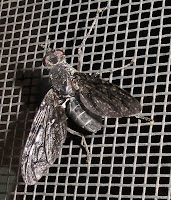 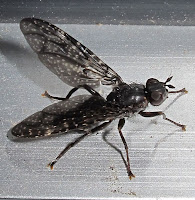 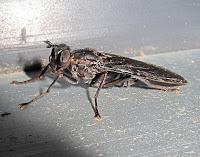 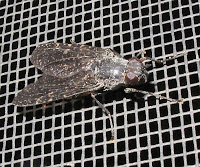 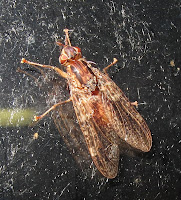 These are very nondescript flies and being darkly coloured usually go unnoticed, plus this is not helped by their largely nocturnal activities. However, they are very unusual flies by producing parasitic larvae that eat adult scarab beetles alive and then pupate inside their exoskeleton. As most scarab beetles are only active at night and spend the day buried in the ground; it is why the Pyrgota Fly is also nocturnal, although occasionally it will feed from flowers during the day.

A characteristic of scarab beetles is the very hard elytra (the hardened forewings that protects the more fragile flying hind wings and the abdomen), a feature which makes life difficult for these flies to pierce the abdomen and deposit their egg. This problem has been solved in several ways by this fly and evidenced by its worldwide distribution with at least 330 species (Australian Faunal Directory).

Some Australian Pyrgotidae species are known to just perch on the back of a beetle and thrust its ovipositor beneath and into the “intersegmental membranes, or through the anal opening” (1). Others will alight on the back of a beetle to make it fly and when it lifts its elytra in order to do so, will insert “the ovipositor through the thin exposed integument of the abdominal dorsum.” (1). However the one I imagine most challenging, is when the Pyrgota fly intercepts a flying beetle as described by the USDA, and with ‘a lightningswift jab with her stilettolike ovipositor and thrust an egg inside the body of the beetle.’ (2).

The scarab beetle will continue to feed at night and then rebury herself during the day, but as her strength fails due to the activity of the larvae inside her, she eventually will remain in her burrow. During this time the fly larvae will have hatched within a few days and immediately began to consume “all the body fluids and fat,” after which it “boldly attacks the muscles and vital organs.” (2). The beetle dies after a week or two and the larvae pupates within the exoskeleton, to emerge as a fully formed fly the following spring.

The local Pyrgota Fly has wings that are clouded brown with pale transparent flecks and extend 25% further than its total head/body length. The species above including the wings, were 2 cm (3/4”) in total length. These largely nocturnal flies are attracted to house lights, which is probably the only way most people will encounter them, and for this reason they are also known as Light Flies.

Posted by William Archer at 6:07 PM