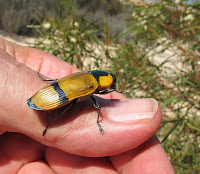 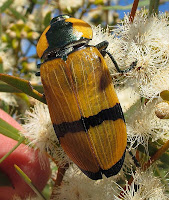 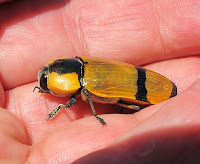 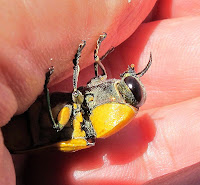 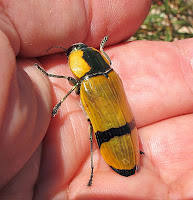 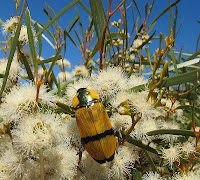 
Temognatha pictipes was another of the large Jewel Beetles (4 cm or 11/2” in length) that made up the mass sighting at Lake Tay during February 2013 (see http://esperancewildlife.blogspot.com.au/2013/05/temognatha-chevrolati-large-jewel.html and http://esperancewildlife.blogspot.com.au/2013/05/temognatha-heros-large-jewel-beetles.html for more detail).

This colourful beetle was quite docile, although after taking a quick look around at the end of my fingers, would take off for a less stressful place with other beetles amongst the eucalypt blossom.

Fauna records indicate this species is endemic to WA, but is very widespread with far-flung discoveries at Perth, Marble Bar and another on the Nullarbor Plain, NW of Eucla. However most records are within an area from Coolgardie to north of Salmon Gums, then west to the Lake Tay region and further west to Lake King, before heading NW to Kondinin (west of Hyden) and eventually ending at Southern Cross (west of Coolgardie).

Within the central area above of the most commonly recorded locations, is a region seldom visited as there are few tracks and no bitumen roads. I would think that this wild mallee area of over 600 square kilometres would be the stronghold of Temognatha pictipes and many other large Jewel Beetles.

My thanks to Kim Pullen of the Australian National Insect Collection, CSIRO Ecosystem Sciences who kindly confirmed the identity this species.
Posted by William Archer at 4:54 PM