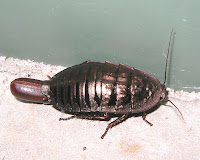 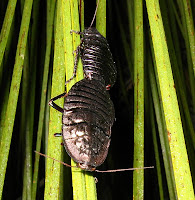 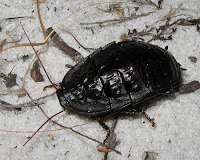 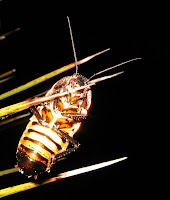 
Euzosteria nobilis  is a member of Blattidae, the largest cockroach family with over 200 Australian species, which are generally known as Bush Cockroaches.  The genus Euzosteria has 10 species (Australian Faunal Directory).  I have called this species ‘Bronze Cockroach’ as it clearly defines the one around Esperance, which is otherwise very similar to the Black Cockroach (see right hand column for details).  However there are a number of bronze coloured cockroaches around Australia, with this species also occurring in SA and Victoria.

Care must be taken when viewing Euzosteria nobilis at night as some individuals are very dark and you must direct the light in the right direction to distinguish it from the more common local Black Cockroach, which is much the same size, around 3-4 cm (11/2”) in length.  In the heathland around Esperance the Bronze Cockroach would be the second most common species (after the Black) and is often encountered.

Copulating cockroaches are rarely seen locally, so the couple above was an excellent sighting.  The timing of this event was August, probably permitting the young to hatch before the onslaught of a hot/dry summer, when this species in particular becomes very scarce. Euzosteria nobilis are very bush orientated and do not invade houses, not even accidentally, although they can sometimes be found wandering around outside where they feed on slowly (not mushy) decaying vegetation.

My sincere thanks to James  Walker of North Queensland who kindly identified this species.

Posted by William Archer at 4:18 PM