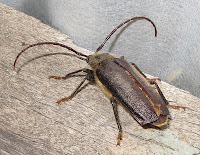 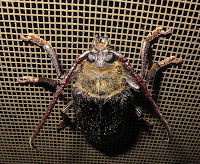 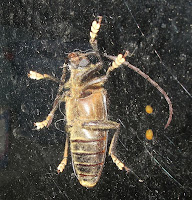 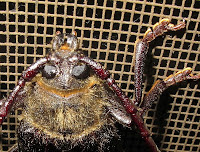 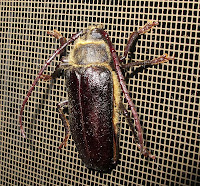 
Dioclides belongs to the Longicorn Beetle family Cerambycidae, but some authorities place these beetles in the genus Cnemoplite​s, although the species names remain the same. The Dioclides classification above is the one recognised by the Australian Faunal Directory and adopted here.  These are large robust beetles from 2.5 - 7.5 cm (1”- 3”) long, excluding the antennae, they are nocturnal and normally coloured dark brown or black and often attracted to house lights, where they can be common on warm humid summer nights.

The beetles above are 4 - 5 cm (nearly 2”) in head/body length and being so chunky with awe-inspiring antennae, are quite impressive to find perched on the flyscreen. Such robust beetles also have large larvae, which spend their time boring into local Banksia, Eucalyptus and Grasstrees to feed on dead, dying or rotting wood. Large moth larvae are known as Witchetty Grubs and are eagerly sought as bush-food by aborigines and others, but these large beetle grubs are similar in size and appearance and are consumed with equal relish.

The larvae plus the adult beetles are equipped with large sharp mandibles that can not only make short work of timber, but also give a solid bite to any finger placed too close, so care should be taken if handling them. Despite their powerful jaws and their capacity to dispatch most invertebrates, none of the many Longicorn species are predatory, but feed exclusively on plant material with many being host specific.

My thanks to Kim Pullen of the Australian National Insect Collection, CSIRO Ecosystem Sciences for identification.