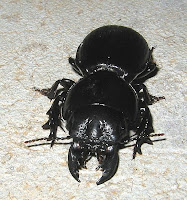 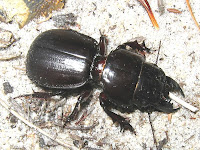 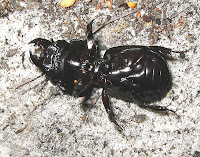 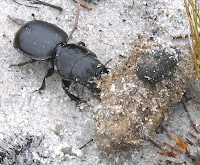 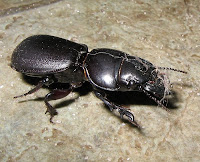 These beetles are large ambling invertebrates, with massive mandibles more than capable of crushing the most resilient exoskeletons of other beetles of which it largely feeds. It can grow to around 5 cm (2”) in head/body length, so very imposing at the invertebrate level; being mainly an ambush predator it can remain stationary for long periods, but other than it dark coloration and night hunting habits, attempts no other form of camouflage.

They live underground, or construct broad tunnels under rocks or logs that are easily dug with their powerful flattened shovel-like front legs. Although mainly nocturnal, I have on occasion seen them in the morning foraging after overnight rain, one photo above shows a beetle vigorously tearing apart an old kangaroo dropping, presumably to reach something tasty inside. Waiting on top of the scat is a Carcass Beetle (see here) that is also interested in the outcome and the possibility of a free meal. Alternatively, it could be the intended meal of the Ground Beetle, but that did not appear to be the case at the time.

These Scaraphites sp. beetles are reasonably common in the sandy (non-calcareous) heathland around Esperance, particularly during the warmer months of the year. There are seven documented species that collectively inhabit all States except Queensland (Australian Faunal Directory). Scaraphites silenus is only recorded from the SW of WA and also in Victoria, but this lack is probably due to limited collections.

I am indebted to Kim Pullen of the Australian National Insect Collection, CSIRO Ecosystem Sciences for this identification.
Posted by William Archer at 2:13 PM