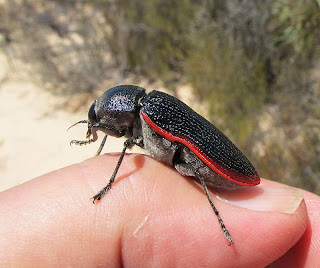 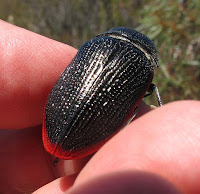 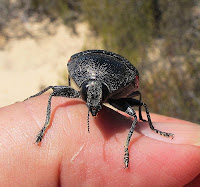 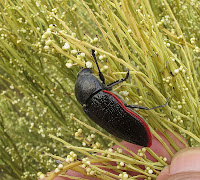 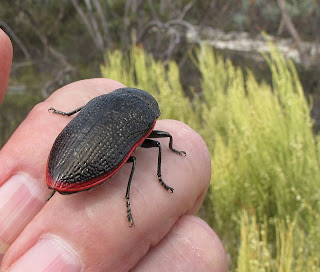 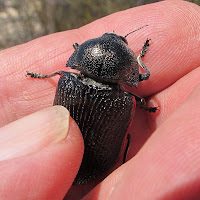 
This is another large Jewel Beetle seen in a mass gathering near Lake Tay in February 2013 (see earlier Large Jewel Beetle 1-4 posts for details). Most of the gathered beetles were feeding from eucalyptus blossom, as was this species although one beetle was found on Choretrum glomeratum the Common Sour Bush, which may be a misidentification by the beetle, mistaking the white floral display for that of a eucalypt.

This beetle was 3-4 cm (11/2”) in length, but unlike most others did not quickly fly away when released and just wandered over my hand and up my arm, even when placed next to the plant where I initially found it. It literally had to be plucked off my person and placed onto the shrub, thus making it the most docile of all Jewel Beetles seen that day.

Temognatha obscuripennis (previously known as Stigmodera obscuripennis) has its most easterly recordings from Albany to Lake Grace and the Hyden district, with the most northerly being from Wiluna (central WA). Therefore having it occur at Lake Tay, which is around 200 km (125 miles) further east is a range extension, although due to the extensive undeveloped mallee habitat of the region is not an unexpected discovery.

Another similar looking (black and red) Jewel Beetle (Temognatha bonvouloiri) whose distribution closely overlaps T. obscuripennis can make identification difficult. Fortunately I also encountered the other beetle in the Lake Tay region, so could provide evidence of both species to Kim Pullen of the Australian National Insect Collection, CSIRO Ecosystem Sciences, who kindly identified them for me.

The genus Temognatha belongs to the Buprestidae family.
Posted by William Archer at 5:00 PM