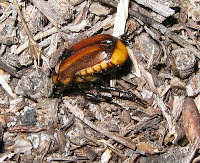 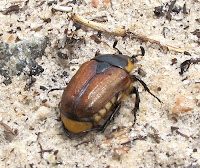 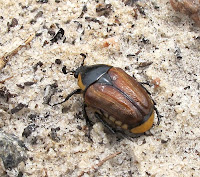 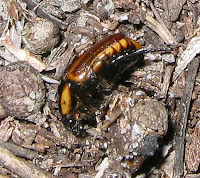 
These beetles as their common name suggests, feed on flower nectar and pollen. There are 3 Aphanesthes species (Australian Faunal Dictionary) and probably all including A. succinea are exceptional fliers and able to tightly twist and turn at will, plus adjust their speed to almost a hover. They do these manoeuvres with a loud buzzing sound due to their elytra’s (hardened outer forewings) being fused together over the more flexible hindwings that are used for flight.

The above species like many invertebrates, is poorly collected and in this instance with only 11 known records. All from WA with most in the Kalgoorlie/Coolgardie region, but also from around Perth, Hyden and 1 in the Pilbara. So those photographed above and encountered near Esperance in deep non-calcareous sandy soil (heathland community) is a new sighting, although not unexpected.

I have seen them on several occasions, although only during January and February when apparent females arrive to lay their eggs in/on buried rotting timber that is eaten by the larvae.  They locate the required area with little effort, possibly aided by imprinting, odor or some other location recognition, as several beetles will arrive one after the other and bury themselves in close proximity to each other.

As the adults are nectar feeders they are most active during the day, but I have not noticed them other than when they arrive in the Banksia speciosa habitat to lay their eggs, which they did in two communal egg-laying sites about 5 metres apart. They grow to around 1.5 cm (little over 1/2”) in length

The Aphanesthes genus is a member of the Scarabaeidae family and the Cetoniinae subfamily.

Regarding identification, my special thanks to Kim Pullen from the Australian National Insect Collection, CSIRO Ecosystem Sciences.
Posted by William Archer at 5:55 PM