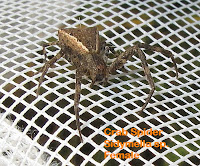 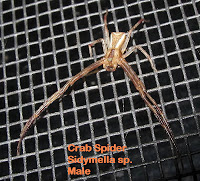 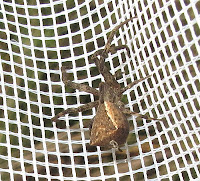 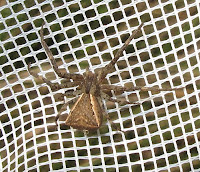 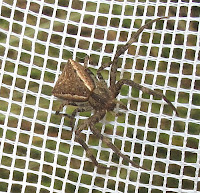 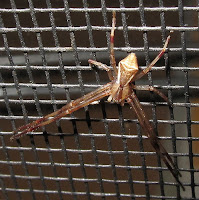 
Sidymella (Crab Spiders) is a genus in the Thomisidae family, which it shares with the Flower Spiders (see here). These are quite small with the above male being 4-5 mm (little less than 1/4”) in head and body length, whilst the female is around 7-8 mm (little more than 1/4”), so not noticeable to casual observation. They are also well-camouflaged in habitat, with the above being found on sedges where not uncommon.

There are 8 described species, but probably many more await discovery and description. They are distributed throughout Australia, but as they are small, well camouflaged, do not build a web and wait in ambush for long periods, are usually only encountered accidentally when forced to move. Typically with Crab Spiders, the rear pair of legs are very small in comparison with the front pair and permit the spider to move in any direction including sideways (like a crab). The front legs are openly extended to rapidly grab any passing prey, with the first pair being longer than the second.

Spiders in the Sidymella genus have a triangular shaped abdomen that is truncated at the rear end; the cephalothorax (head end) is pear shaped with the widest portion adjacent to the abdomen. Despite the male and female couple above being found within a kilometre of each other (approx. 20 km or 12 miles east of Esperance), plus the markings appearing related, I have no other indication that they are the same species.

Posted by William Archer at 3:50 PM