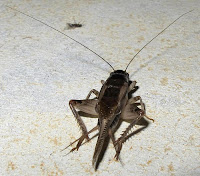 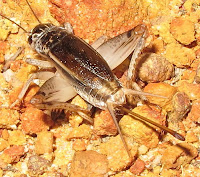 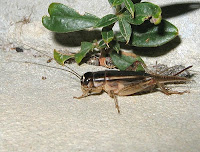 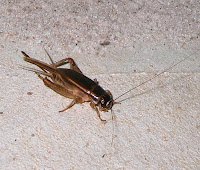 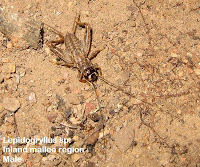 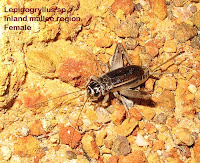 
Field Crickets belong to the Gryllidae Family and are known as true crickets because they represent what most people regard as crickets ie ground dwelling, darkly coloured and renowned for their enthusiastic chirping on mild summer evenings. Family species number in their hundreds and are found Australia wide. Gryllidae is part of the Grylloidea Superfamily along with the impressive looking Mole Crickets and are recognised by females having long cerci and a straight ovipositor.

These crickets are mainly nocturnal and hide during the day under or in logs, rocks, burrows, etc. Their diet is described as omnivorous, so if it can be subdued and tastes all right, it will probably be eaten. According to Dr David Rentz who kindly identified this species, there are two species that are identical in appearance and can only be separated by the speed of their chirping. L. comparatus is the slow chirper, whilst L. parvulus the faster.

Field Crickets favour warm moist environments, but around Esperance especially during summer, this is rarely the case, which means they are not very common in the district, although appear to be quite widespread. The ones above on a gravel background are from an inland mallee region north of Esperance, whilst the others were encountered in near coastal heath.

Posted by William Archer at 4:35 PM